Japanese TV Gets A Taste of Apt2B's Furniture Expertise

Japanese TV Gets A Taste of Apt2B's Furniture Expertise

TV producers from the hit Japanese reality show “Fantastic Researcher” knew exactly who to call when they needed American experts for their special home furniture episode – Apt2B. Within hours of the call, Apt2B co-founders Mat Herman and Alex Back were jet-setting to Japan for a week of filming, touring Tokyo, and talking furniture with some of the biggest names in the game, Muji and Nitori. Read on to learn all about the crazy international adventure from the perspective of Apt2B co-founder Alex Back!

It was a normal Monday at Apt2B HQ: phones ringing, e-mails going out, and furniture getting loaded up for delivery. That’s when a strange e-mail found its way to my inbox. The subject line read: “Urgent: TV Asahi Japan Featuring Apt2B”. It’s not every day that you receive an e-mail inviting you to star in a Japanese reality TV show. Naturally there was some initial skepticism. Is this legit? Is my identity about to get stolen? Plus, if we’ve learned anything from Chris Farley on SNL, being on Japanese TV can be dangerous (thankfully we had interpreters). After some thorough investigating (read: a Google search),  I learned that the TV show, named “Fantastic Researcher,” was indeed a real series. And it was indeed on a real TV channel. In fact, it’s on TV Asahi, one of the biggest TV networks in Japan. I discovered that “Fantastic Researcher” is described as an, “inter-cultural, educational, variety-reality show” (whatever the hell that means).   Now, we all know (and love) the stigmas attached to the idea of a Japanese TV Show. We could see this going one of two ways: either this would be a great chance to share knowledge with some real thought-leaders in the home furnishings biz… or we were about to get slimed. In front of a live studio audience. We took the risk (but packed some rain slickers just in case).

Apt2B is no stranger to the limelight. We’ve been featured on “Shark Tank”, we furnished the entire MTV “Real World” house, and our prize packages are regularly featured in the CBS game show “Let’s Make A Deal”. In those cases it’s the furniture that gets to speak for itself. On “Fantastic Researcher” it was going to be me and Mat doing the talking. Each episode of “Fantastic Researcher” takes a look behind-the-scenes of a specific industry to give audiences a glimpse of how the magic happens. The show brings foreign experts to Japan to offer their advice and provide outside experience. Momoko, one of the show’s producers, explained that they were going to feature us as the American experts for their upcoming episode about furniture companies. The episode was set to feature two of the hottest, fastest growing home furniture companies in Japan, Muji and Nitori. It was going to be one of their biggest episodes of the season because these two companies had never let people get an intimate view of their offices and warehouses. But we had a golden ticket. An opportunity to rub shoulders with Japanese furniture titans and drop some knowledge about how we do things in America? Sign us up.

After landing, we breezed through customs and headed out through the arrival gate. A camera crew immediately swarmed us with tape rolling and a surprisingly-aggressive interviewer launching questions at us. Our week of intense filming started literally right out of the gate. We did our quick “Welcome to Japan’s, attempted some bows, and capped things off with a couple of American high-fives. The production crew gathered for a quick internal meeting and decided that they needed to get a second take of our arrival. This time there would be one slight change – I would no longer be in the shot. Such was the story of my 20 seconds of international fame. The spotlight quickly landed on Mat “Hollywood” Herman for the rest of the week. Mat easily slipped into his role as the shining star and I happily played the part of talent manager, picture-taker, and water-fetcher. 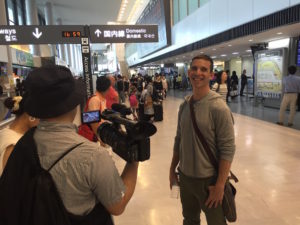 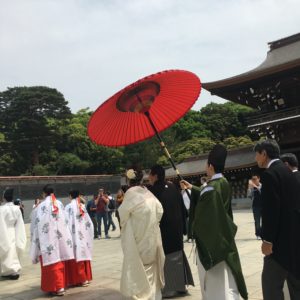 A taste of formal Japanese culture. Then again, we use umbrellas in LA, too. 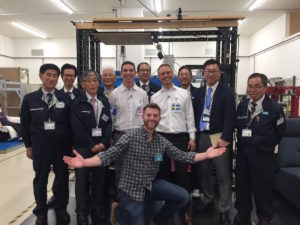 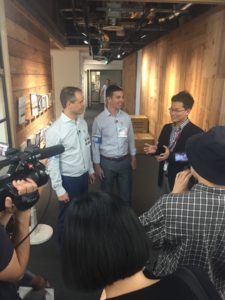 Nitori: The Bed Bath & Beyond of Japan

Nitori is the biggest home furnishings chain in Japan. It’s nearly identical to Bed Bath & Beyond but with way more emphasis on furniture and far fewer syllables. We toured the Nitori flagship store on our first day of filming. The Nitori fellas answered detailed questions about furniture, home decor, and pretty much everything in the store (imagine getting asked questions about everything from bed frames all the way down to the design of a trash can). We then toured Nitori’s corporate HQ and testing facility where they sent their furniture through some pretty rigorous testing (like having a mannequin repeatedly sit down in a recliner to test its durability. 12,000 times. Literally.). We even toured Nitori’s warehouse where they had built an entire mock apartment, which they use to train their delivery teams on the ins and outs of delivering large pieces of furniture (take our word for it – furniture delivery ain’t easy). 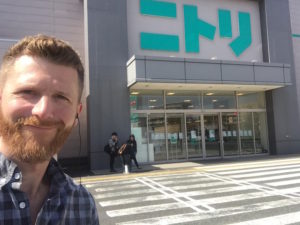 Me (Alex Back), taking a quick selfie outside Nitori, the Bed Bath & Beyond of Japan 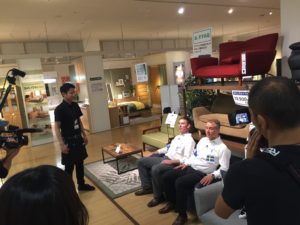 The Nitori showroom is a comfy place 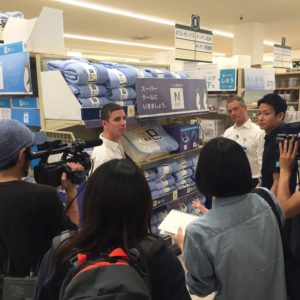 Mat checking out the goods 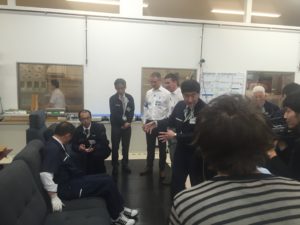 Muji: Why Buttons and Muffins Matter

Perhaps the highlight of the trip and shoot was Muji. Muji is a Japanese home furnishings and lifestyle brand with an international presence. They have a few big time US stores in NYC and LA. It’s sort of Ikea-meets-Urban-Outfitters-meets-Willams-Sonoma with a strong Japanese vibe. Touring their flagship Tokyo store would be exciting but, more importantly, we couldn’t wait to see their corporate HQ. Their offices were crisp, clean, and stylish – would you expect anything less from a hip Japanese company? Mat got to sit in on a number of important meetings. The first one focused on a new product and its potential functionality. The second focused on important customer feedback, such as removing the muffin wrapper from their $3 muffins and whether or not the company should continue including the two “just in case” buttons sewn into their shirts. Members of the board presented several solutions for the button question. Perhaps replacement buttons could be available at the store for customers? Perhaps a sewing kit should be included with each purchase? At this point Mat asked everyone to raise their hands if they had ever used the replacement buttons on a shirt. Not a single hand went up. And with that, Mat Herman may have single-handedly pulled the plug on extra shirt buttons. #sorrynotsorry. And, if you’re curious, everyone agreed that a muffin without a muffin wrapper is simply not a muffin. End of story. 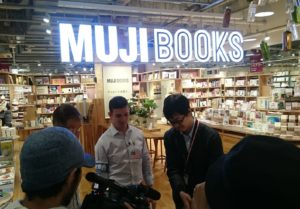 Muji is one of the coolest companies in the world right now. Their showroom did not disappoint. 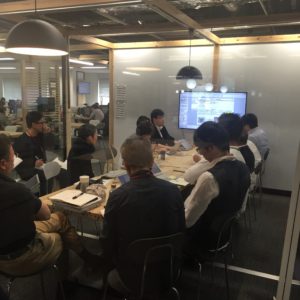 The Muji chiefs discussing muffins and buttons. All the important details. 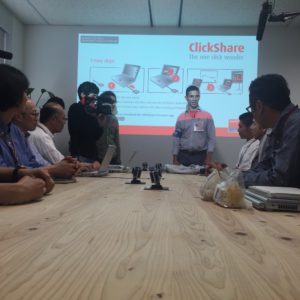 Mat dropping some knowledge on the Muji “suits” 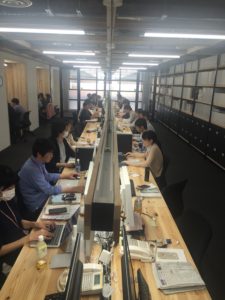 Muji definitely embraces the modern office layout. I even got my own personal workspace for the day! It was not very private.

The most impressive thing about Nitori and Muji was how much emphasis they put on customer satisfaction. It was a reminder of why we do what we do – we want to make people happy. At the end of the day the furniture we make, the work that we do, and the effort that we put into our business is all for a single purpose: provide our customers with a place that they’re happy and proud to call home. These companies were doing everything possible to understand and cater to the customer, from building fully-furnished, fake houses within their warehouses so they could better train delivery teams, to having meetings with an entire room of senior “suit and tie” employees discussing the baking methods of a single $3 muffin. Personally we pride ourselves on being first-in-class in customer care at Apt2B. That being said, this customer-centric strategy is more of a buzzword in America than a practice. 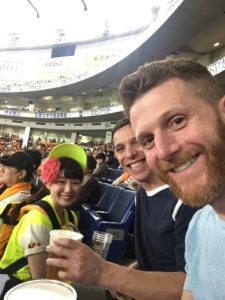 Beer girl with a mini-keg on your back. Yes, it was extremely impressive! 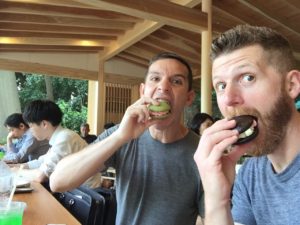 Yes, these were delicious. No, I have no idea what they were. 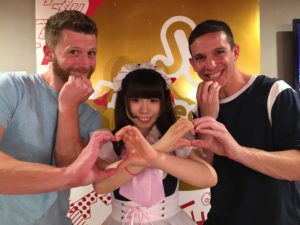 We were told this was a normal thing to do in Japan. We may have been lied to. 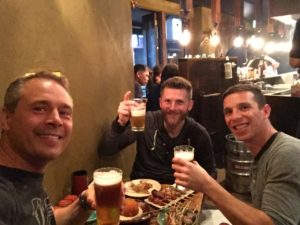 Who said all Japanese dinners had to be authentic?

What’s that they say about March? In like a lion, out like a lamb? Well, here’s to hoping....